Travel Updates:
Hop on hop off is back! City Explorer is delighted to announce that our full hop-on, hop-off bus tours have resumed alongside our new Beatles Explorer Tours – we hope to see you on board soon! 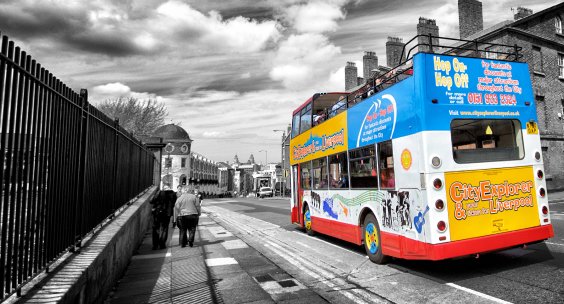 Liverpool is one of the most exciting cities in the UK with an incredible amount of history and points of interest, we would never be able to cover them all in just one tour!

One of the many attractions that any Beatles fan would enjoy,  the Cavern Quarter is located on Mathew Street in Liverpool’s city centre and encompasses the famous Cavern Club as well as many lively bars and clubs that will suit any taste. Outside the Wall of Fame, you can spot the John Lennon Statue, a popular spot for group photographs and selfies alike as well as a plethora of different musical memorabilia from past performances. The sightseeing tour takes place in the afternoon however it is well worth coming back to Mathew Street in the evenings to sample the nightlife and electric atmosphere it gives off.

Liverpool One is one of the most popular tourist attractions in the city, a huge shopping & leisure complex right in the city centre that is full to the brim with fantastic restaurants, bars, designer clothes stores and more that are ideal for a great day out.

St Luke’s (The Bombed Out Church):

One of the most fascinating buildings in the city has to be St. Luke’s Church or better known simply as the Bombed Out Church. During World War II, Liverpool was heavily bombed by the German Luftwaffe, and during one blitz on the 5th of May 1941, a bomb struck St Luke’s Church, and fell straight through a roof tile, exploding inside the building and miraculously leaving the structure in tact.  Today, the Bombed Out Church stands as a memorial for the thousands of people who died in the Liverpool Blitz of World War II.

This cathedral lies on the same street as the Liverpool Anglican cathedral on Hope Street,

The Albert Dock is one of the most historic locations in Liverpool City Centre and a very popular tourist attraction. Today, the Albert Dock is home to a wide variety of stunning restaurants, bars, museums, stores, as wells as many other attractions and activities.

Interested in seeing more of Liverpool? From the Albert Dock to the city’s musical heritage, we have compiled a list of the top things to do in Liverpool. You can see all of these tourist attractions and many more on our sightseeing tour complete with an expert tour guide!

You can keep up to date with the latest news and information from us here at Maghull Coaches by following us on all of our social media platforms:
Like us on Facebook:
Follow us on Twitter:

GET TICKETS
The Easiest Way to Explore the Best of Liverpool
Book Online
*All of our vehicles are now wheelchair friendly! Please call 0151 933 2324 if you have any other accessibility requirements.

Great Days Out in Liverpool for Art Lovers

As a city of culture, Liverpool shines when it comes to art and creative storytelling. That is why it was...

The COVID-Friendly Events Coming to Liverpool in 2021

It’s been a whirlwind of a year but things are certainly starting to look up! April saw the lifting of...

Outdoor Places You Can Still Visit in Liverpool During Lockdown

Welcome to 2021 and what is hopefully going to be a much more positive year for us all! We know...

How Liverpool Businesses Have Adapted Their Services for COVID-19

We know times are tough right now, for businesses and the general public. With good reason we must all make...

The Top Activities in Liverpool This Christmas – Plus Our Winter Times!

Ho ho ho, Santa is coming to town! If you’re not already prepared, it’s time to get yourself ready. Take...

Set Sail for a Summer of Music on the Mersey!

Make the most of warm summer evenings with live music on board a Mersey Ferry. Summer 2019 sees the biggest...

Read More
GET TICKETS
The Easiest Way to Explore the Best of Liverpool
Book Online
*All of our vehicles are now wheelchair friendly! Please call 0151 933 2324 if you have any other accessibility requirements.

The freedom to explore is all yours. Choose your preferred tour below.

Go sightseeing in Liverpool with City Explorer. Our ultimate hop on, hop off bus tour visits the best destinations across Liverpool. Learn facts about the city from a live tour guide.

Take a journey through time and discover the rich history of Liverpool Football Club. LFC City Explorer takes you towards Anfield, featuring the best city views and a tour guide.