Travel Updates:
Hop on hop off is back! City Explorer is delighted to announce that our full hop-on, hop-off bus tours have resumed alongside our new Beatles Explorer Tours – we hope to see you on board soon!

Great Days Out in Liverpool for Art Lovers 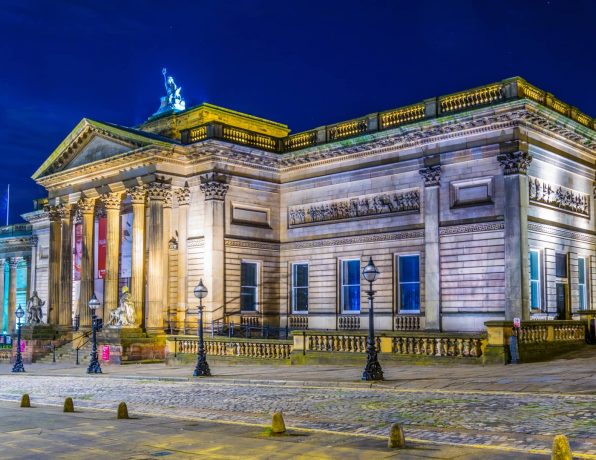 As a city of culture, Liverpool shines when it comes to art and creative storytelling. That is why it was awarded the European Capital of Culture status for 2008. The city is home to several fantastic galleries and iconic sculptures. It is also a regular host for showpiece events and exhibitions, including the astonishing Liverpool Giants project which captured the attention of millions during a series of three shows. So for people who have a keen interest in art, there really isn’t a better city for a visit.

If you are an art lover looking for a great Liverpool day out, then look no further! In this blog post, we round up some of the best ideas for an art-filled day.

The Walker Art Gallery is one of Liverpool’s biggest and best galleries. You can found the gallery on William Brown Street, next to the World Museum and St George’s Hall. The Walk Art Gallery has several collections of paintings, sculptures and decorative art, making it one of the country’s largest art collections outside of London. Current exhibitions include Sickert: A Life in Art, a retrospective of eccentric artist Walter Sickert, and AI: More than Human, a deep look into the world of artificial intelligence. Admission to the Walker Art Gallery is free except for certain exhibitions.

The Liverpool Biennial is a regular festival that celebrates the UK’s contemporary visual art. The festival takes place across several months at multiple venues, from public spaces to historic sites and art galleries. The 2021 theme of the event is the Stomach and the Port, exploring notions of the body and ways of connecting with the world. There will be free exhibitions, performances, events and screenings with showings from 50 international artists.

Tate Liverpool is an art gallery at the Royal Albert Dock Liverpool. The gallery has displays of artwork from around the world and hosts a wide range of programmes. Entry to Tate Liverpool is free except for certain exhibitions. Outside Tate is the Liverpool Mountain, a 10-metre high multi-coloured sculpture comprising five vertically-stacked rocks.

Street art can be an extremely important part of a city’s culture. Not only does street art look unique and interesting, but it represents freedom, communicates ideas and expresses emotion. It helps transform an ordinary street into something that captures attention and admiration. That is certainly the case with the Liverpool Wings. Found on Jamaica Street in Liverpool’s Baltic Triangle district, this artwork has become a huge attraction for people flocking to the city. It provides the perfect backdrop for a selfie or a professional photoshoot, allowing people to capture the illusion of wearing the wings of a Liver Bird. The Liverpool Wings was created by local artist Paul Curtis in 2017.

Liverpool is no stranger to famous figures. From musicians to comedians, the city has birthed some of the world’s most successful people. There isn’t a better way to honour iconic figures than with imposing monuments. At the Pier Head, you will find a statue of The Beatles, a popular spot for photographs. If you look into the detail you may even catch a few easter eggs, such as Paul McCartney’s camera, a homage to his marriage to photographer Linda Eastman. There is also the Cilla Black statue on Mathew Street, a tribute to the much-loved singer and television presenter. Dingle-born singer Billy Fury has a statue alongside the waterfront while comedian Ken Dodd’s monument is based within Lime Street Station. Football fans can visit Goodison Park and Anfield Stadium to get up close and personal with statues for club legends Dixie Dean and Bill Shankly. While not dedicated to a specific person, Crosby Beach is home to 100 sculptures of cast-iron figures. The statues represent man’s relationship with nature.

No matter your tastes, Liverpool offers just about everything! From art to music, shopping, crazy golfing and more, there’s a little something for everyone. We may be biased, but we highly recommend Liverpool if you are planning an exciting day out soon! You will be spoilt for choice when deciding what to do here. Thankfully, we have you covered. We have created a thorough guide to days out in Liverpool. From morning through to evening, we highlight some of the best ideas for a day out for people of all ages and interests.

Did you hear we are back up and running with multiple Liverpool sightseeing bus tours? We now offer a one-hour Panoramic Tour, taking you around the city’s best spots. We have also recently introduced a Beatles Explorer Tour which visits iconic locations in the history of the Fab Four.  Book tickets today to guarantee a spot on one of our tours. We can’t wait to resume our traditional hop-on-hop-off tour soon.

GET TICKETS
The Easiest Way to Explore the Best of Liverpool
Book Online
*All of our vehicles are now wheelchair friendly! Please call 0151 933 2324 if you have any other accessibility requirements.

The COVID-Friendly Events Coming to Liverpool in 2021

It’s been a whirlwind of a year but things are certainly starting to look up! April saw the lifting of...

Outdoor Places You Can Still Visit in Liverpool During Lockdown

Welcome to 2021 and what is hopefully going to be a much more positive year for us all! We know...

How Liverpool Businesses Have Adapted Their Services for COVID-19

We know times are tough right now, for businesses and the general public. With good reason we must all make...

The Top Activities in Liverpool This Christmas – Plus Our Winter Times!

Ho ho ho, Santa is coming to town! If you’re not already prepared, it’s time to get yourself ready. Take...

Set Sail for a Summer of Music on the Mersey!

Make the most of warm summer evenings with live music on board a Mersey Ferry. Summer 2019 sees the biggest...

City Explorer Has Been Nominated for the LCR Tourism Awards 2019

This year mark’s our 20th year of operating the City Explorer tour bus and we couldn’t be more delighted to...

Read More
GET TICKETS
The Easiest Way to Explore the Best of Liverpool
Book Online
*All of our vehicles are now wheelchair friendly! Please call 0151 933 2324 if you have any other accessibility requirements.

The freedom to explore is all yours. Choose your preferred tour below.

Go sightseeing in Liverpool with City Explorer. Our ultimate hop on, hop off bus tour visits the best destinations across Liverpool. Learn facts about the city from a live tour guide.

Take a journey through time and discover the rich history of Liverpool Football Club. LFC City Explorer takes you towards Anfield, featuring the best city views and a tour guide.